I learned of Cocteau when I overheard “Amelia” from my sister’s room.  “Amelia” was interesting, but Liz Fraser’s singing baffled me at first.  “That’s their whole style”, she said. This seemed too ‘weird’ for me. But that was when “Pandora” came on, which changed my mind the second it hit that chorus. Before I knew it I was obsessing over dream pop and all things ‘atmospheric’. Like the Banshees, CTs showed me an atmospheric density I hadn’t thought possible before.

The melody’s rapid syllables could become too much, but Fraser’s voice makes it sound easy and free. Add guitar wash from Atlantis and her most angelic falsetto and every note feels like a fountain. For all I knew, they were playing those drums from under a well.

“Pandora” is one of those rare songs with a therapeutic quality, where I wish I could take a nap in it. I pictured a happy-sad farewell in some aquatic world, where someone watches their friend journey off. It’s somewhere between this and the purest daydream.

Complex emotions like these are part of Treasure’s power. It will evoke such grand, sublime images and feelings across time and space, but never one at a time.

I love fall but I’m not ready for it. For one thing, it feels less fitting to post more of my findings in sophisti, a style screaming ‘cocktail party at the beach’. I meant to do more than my August mix, but that time flew as usual. Thus, a title like Autumn In The Neighbourhood enticed me.

I’m not sure if this is autumnal as much as windy and down-to-earth, but it’s close enough for me. I wish more sophisti had this imagery, I know that much. This being their ‘comeback’ album (2015!), China Crisis perform with more ease and nuance than ever. Decades later, they’ve kept that same elegance that defines sophisti-pop. The subtle keyboards, clean guitars and hints of brass are all here. Add a nostalgic, thoughtful mood and you have a great scene-setter. It’s the kind of British eighties(-styled) pop where you can just feel the busy city and morning breeze. It’s hard to name favorites but this comes from the impressive coherence more than anything else. 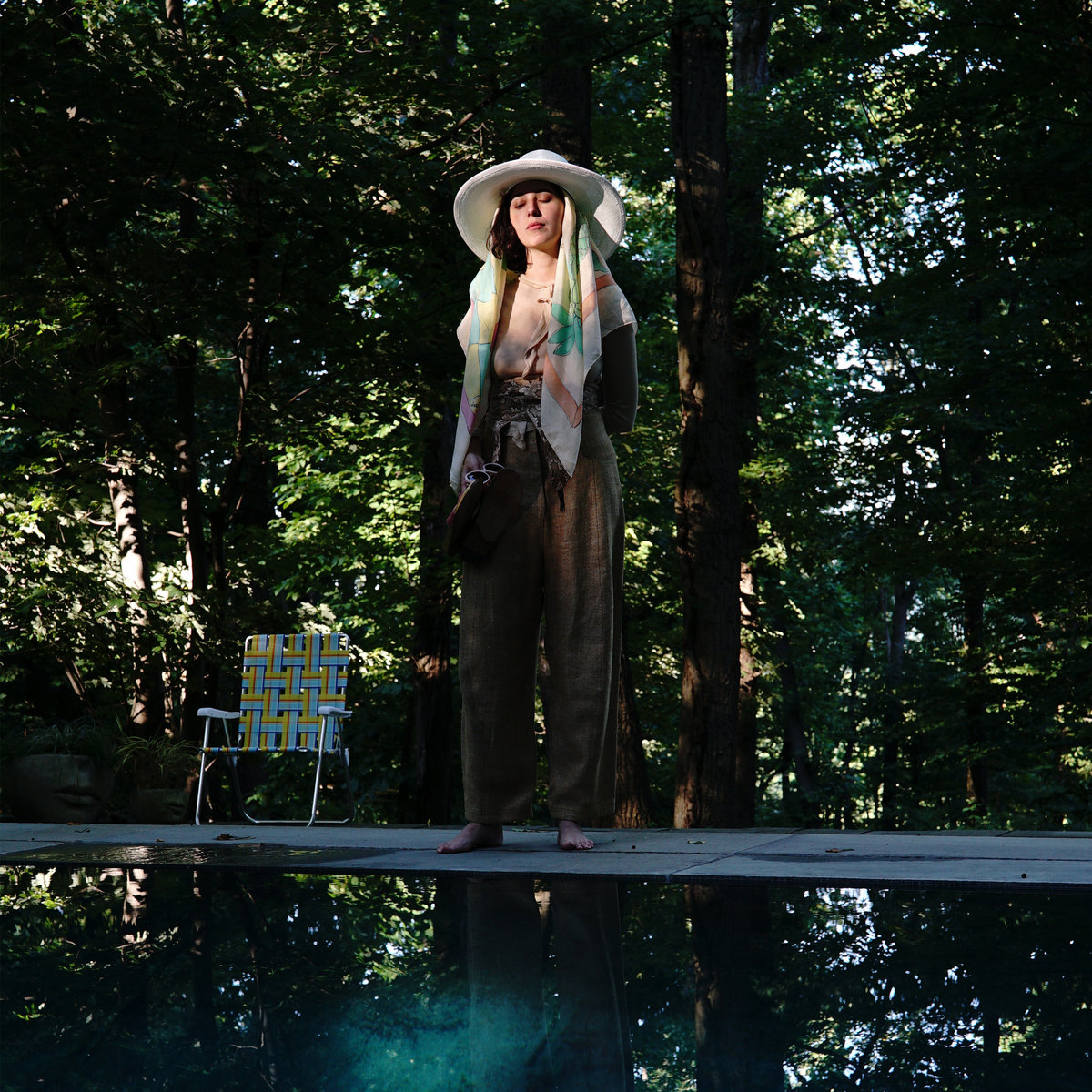 Using more synths this time, Maria Usbeck’s second album emulates a digitized canopy. It’s another one where cold synths prompt human feeling despite their origins. Skeptics will claim they lack feeling but Maria’s music hasn’t lost any of that.

Which brings me to what stuck from Amparo: her incredible talent for calming the listener. Her travels in Ecuador to reconnect with her past continue to influence the effect of her songs. Like home, or what feels like it, Maria’s music relaxes with it’s everyday air. As she composed by herself, everything sounds filtered through her perspective. That is, besides the odd speech from Siri (!) or her grandmother. Envejeciendo is a traveling laptop’s creation.

What struck me about her ‘chill-out’ effect is that it feels so grounded. It doesn’t assume everything is or will be perfect. She doesn’t aim for escapism, as much as that works for other music. Instead, she uses this space to ask questions. Yet she does this without getting bleak; some songs veer on humorous. She seems to find comfort in more realistic conditions. Her lyrics concern aging (the album’s English name) and how new tech changes our thinking. I’m glad to see her explore these themes when few others do and when the cult of youth stays strong.

Envejeciendo peaks at the end with “Retirement Home” and “Nostalgia”. With the album’s richest synths and her own tender voice, they form a compelling mix of cathartic and relaxed tones. “Retirement Home” imagines ideal senior living, with metallic synth-bells adding a spa-like hypnosis. “Nostalgia” matches the title in seconds with breezy synth chords glowing like fireflies. As intended, it’s perfect for those fleeting daydreams of the past.

The drum machine beats are my main gripe as with too many recent albums. And I say this as a synth-pop fanatic! The issue is, no matter how classic the 909 is, the novelty wears after decade-long overuse.

I prefer Amparo but this is a worthy album with it’s own great ideas. It’s very digestible at 27 minutes. Maria’s solo career keeps taking refreshing turns and deserving a closer look.

Milan Pilar (born 1934 in Czechoslovakia) is a master of fantasy melodrama. Once he came to use synths, his music became the soundtrack for finding a magic necklace in a pastel-colored forest where anything can happen. Milan created these images in gorgeously exaggerated detail that can touch your heart if you let it, no matter outlandish it may seem at a glance. He had a talent to induce the most grandiose emotions with impact and genuine tenderness.

Most songs will have sweeping synths and/or strings as a backbone, with digital bells and flutes playing the melodies. Many are wistful and sensitive as if telling you secrets in it’s hiding place, some carefree and happy, others cinematic and awestruck. No matter the mood, they never lose their Moomin-worthy fantasy charm and romantic expression. It’s a shame Pilar didn’t wind up directly composing for children’s fantasy movies.

He also kept a distinct sound across ten-plus years, something rare for library composers. For instance, his 2003 album Nature In Motion has the virtual same approach as his late-eighties work.

I’ve gathered my favorites from across his albums to give a good taster for his style (link above).

A boîte à oiseau chanteur or singing bird box is a music box with mechanical ‘birds’ singing along to the tune of the bells, organs, and so on in high pitch while twitching their heads, turning and moving their wings. This video is a great example.

The Encyclopedia of Automatic Musical Instruments is a huge resource on self-playing antiques like orchestrions, music boxes, barrel organs, fairground organs, and player pianos. The book features a lengthy chapter on each variety with origins, histories on specific developers, galleries, old promos, and details on specific models’ functions.

‘A racket that mixed up Blondie with Siouxsie And The Banshees’; said one critic on Yeah Yeah Yeahs. Who were the Banshees?, I thought eight (!) years ago. Soon I found “Into The Light” on my sister’s iTunes by fluke and it blew my mind within seconds. I knew nothing about the new wave scene and the endless creativity within yet, so you could imagine my awe.

The song resembled a campfire with Siouxsie as the enigmatic storyteller. The guitar sizzled over Budgie’s drums like wood covered in flames. With this band, guitar worked more as the portal to their surreal worlds than a tool for beefy riffs. John McGeoch’s ‘Gizmo’ effect pedal played a big part in this. “Into The Light” has a raw instinct for sure, but they didn’t look past melody; it’s an agitated beast. Likewise, something vulnerable lies in Siouxsie’s defiant voice. Her lyrics insist on rhymes with ‘light’:

Our hearts entwine / a new horizon

Remember when / bleached into white

Your time again / kept out of sight

Standing in the light

I never wanted to be right

Now I’m attracted by the light

And blinded by the sight

What is this light? ‘I never wanted to be right’; it’s confessing something, it sounds defeated. Genius suggests a light-before-death scene, fitting the cosmic images though not confirmed. Either way, I couldn’t ask for a stronger delivery.

Key to Juju’s impact was how it found Siouxsie between her punk roots and later refinement. She reached a raw desperation (especially live) that wasn’t quite the same with earlier and later periods. As it took one jam-based take to record with improvised lyrics, this song came from pure impulse. It told me that spontaneous bursts can birth the best inspiration.

Go here for my Siouxsie gateway playlist if you’re unfamiliar.